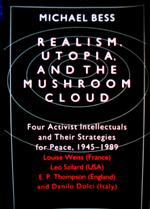 My first book was Realism, Utopia, and the Mushroom Cloud: Four Activist Intellectuals and Their Strategies for Peace, 1945-1989 (U. of Chicago Press, 1993).

How have the fearsome weapons of the nuclear age changed the rules of international politics?  Can cooperation gradually come to replace coercion as an instrument of international security?  This book compares the careers of four intellectuals who grappled with these questions — four dissidents who shared a revulsion for the nuclear “balance of terror” but who possessed sharply divergent visions of a post-Cold War peace.

Louise Weiss, a French journalist and Realpolitiker, believed that only a third military superpower — a “United States of Europe” — could break the Cold War impasse.

Leo Szilard, a Hungarian physicist and father of the atomic bomb, spent the last two decades of his life prodding the Soviets and Americans toward cooperative diplomacy.

Danilo Dolci, an Italian poet, worked in mafia-ridden Sicily experimenting with methods of nonviolent conflict resolution that he hoped would prove effective globally.

By comparing the ideals, the triumphs, and the failures of these activists, this book illuminates the problematic boundary between “realism” and “utopianism” in the nuclear age.

For book reviews of Realism, Utopia, and the Mushroom Cloud, click here.