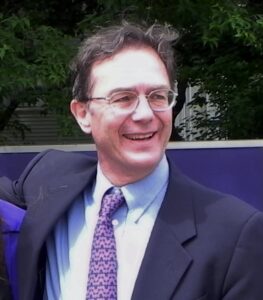 Michael Bess, Chancellor’s Professor of History at Vanderbilt University, is a specialist in 20th- and 21st-century Europe, with a particular interest in the interactions between social and cultural processes and technological change.

His fifth and most recent book is Planet in Peril: Humanity’s Four Greatest Challenges and How We Can Overcome Them (Cambridge University Press, September 2022).  This study focuses on the existential risks posed by climate change, nuclear weapons, pandemics (natural or bioengineered), and artificial intelligence – surveying the solutions that have been tried, and why they have fallen short thus far.  Bess describes a pathway for gradually modifying the United Nations over the coming century so that it becomes more effective at coordinating global solutions.  The book explores how to get past ideological polarization and global political fragmentation, drawing lessons from the experience of the environmental movement and of the European unification movement.

He is the author of four other books:

Bess is co-editor of a volume of scholarly essays on bioenhancement technologies and their social and ethical implications: Posthumanism: The Future of Homo Sapiens (Macmillan Interdisciplinary Handbooks / Gale Cengage, 2018).

He is currently at work on three book projects:

Bess has been teaching at Vanderbilt since 1989. He offers undergraduate courses on the history of environmentalism; human flourishing; the societal and moral implications of human bioenhancement; World War II; science and technology studies; the nature of human agency in history; as well as general survey courses on Europe Since 1900, and Western Civilization Since 1700. His graduate courses include seminars on World War II, Leonardo da Vinci, and a semester-long workshop to train graduate students for teaching history at the college level.